I thought I should make a note of my spinning progress so far, especially as I am now spinning a little everyday.

In a previous spinning post I had talked about my problems with drafting fibre and disastrous results…or should I call it art yarn!

My next post was about creating rolags and spinning from those which I definitely found easier, I made some useable 2 ply yarn in the landscape colours and went on to knit an ipad cover with the yarn.  Don’t look too closely or you’ll notice some cables aren’t the same length!  Oh and Judy’s Magic Cast On was a disaster as its on the inside of the bag!!!  oops! 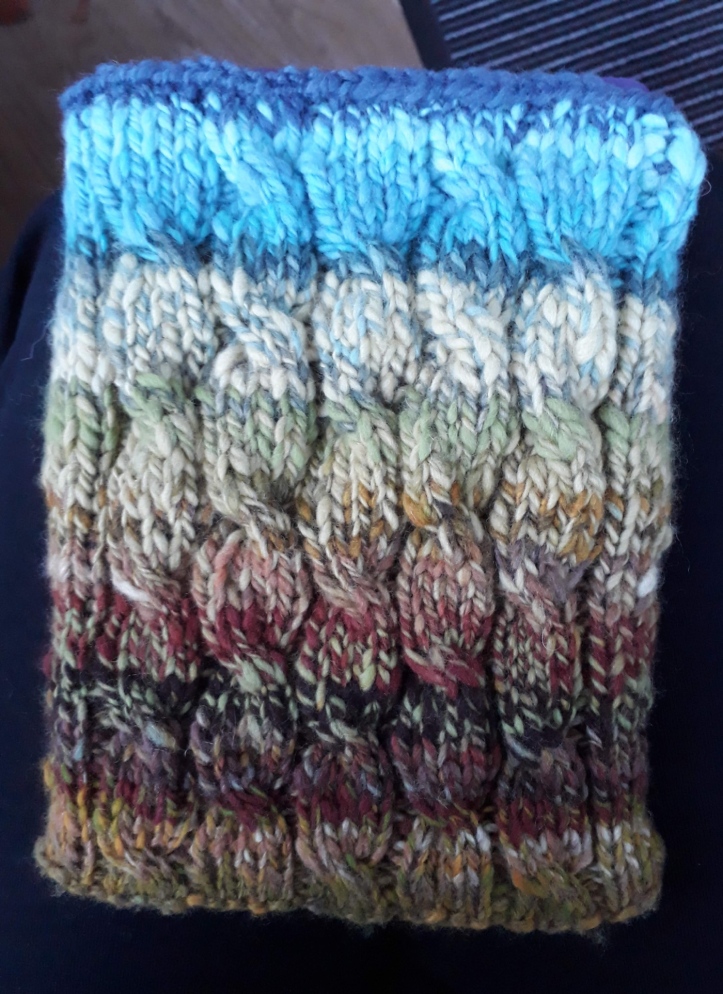 I had other attempts at spinning from rolags, I had spun a selection of peach and red toned fibre scraps and I really liked it on the bobbin…but when I set it, I massively overheated it and ended up felting the yarn and the colours ran and it ended up orange.  Regardless of the quality I am determined to make something out of everything I spin, so thanks to Ravelry’s pattern search I found this wee business card holder pattern.  The cabling doesn’t really stand out I think because it felted so much, plus it was 2 ply.

I also spun some purple and pink scraps, again making a 2 ply yarn.  This time I made a dog poop bag holder!  I crocheted it, without a pattern and it is sooo soft, it feels lovely.  Again the yarn slightly felted when setting it, but not as much. 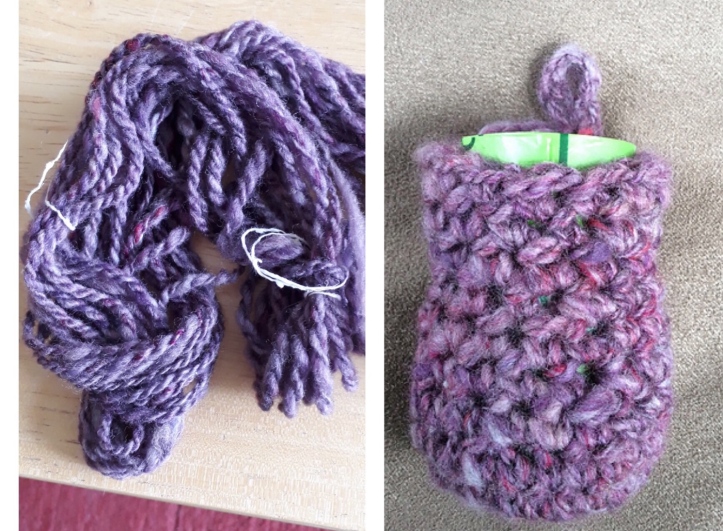 Then I took on a bigger challenge, rather than using a bag of scraps and creating rolags, I wanted to give pre-drafting a go.  So with 200g of Perpetual Purple Paradise from Gilliangladrag online shop I pre-drafted and then spun all 200g.  What I have ended up with is 3 ply yarn, some of which is Aran weight and some is Worsted weight.  (Not intentionally different weights, just shows the improvement in my drafting.).

I am thinking I will make a hat, cowl and mitten set…depending on how I get on they may be wrist warmers and not mittens.  I gave chain plying a couple of goes, but again I would call that art yarn based on the inconsistency, the lumps, the coil spinning in parts.  Not sure if it is usable yet…it may end up being used to make a bobble instead.

You’ll notice it says Pre-TDF and then Tour de fleece day 1 on the image above.  I will explain more about that on my next post.

What I have learned so far

Side thought – writing a blog that may be read by Americans and Brits is a challenge re: spelling!  Do I just stick to UK English and assume Americans will understand we spell things differently?  In the UK practice is a noun and practise the verb…in the US practice is both noun and verb!  Then there’s fibre and fiber!  Never mind all the words we put a u in that American’s have done away with!  Hmm perhaps I’ll just randomly mix them up and confuse everyone 😉
Edited with BlogPad Pro