It’s a long one this week!  (“That’s what she said!” To quote The Office TV show)

On Thursday, I finally started to do some lampshade preparations.  I spent the afternoon cutting out pre-felt and laying fibres down to make 4 x 20cm lampshades.  I have done a mix of designs and will get those felted early next week.  I also plan to make some 25cm ones next week as well, but this was a good start to get back my felting mojo.  The 3rd one down has purple heather colours, which hasn’t come up in the photo very well, the bottom one has the russet bracken we get up here in autumn.  Sheep will be added later. 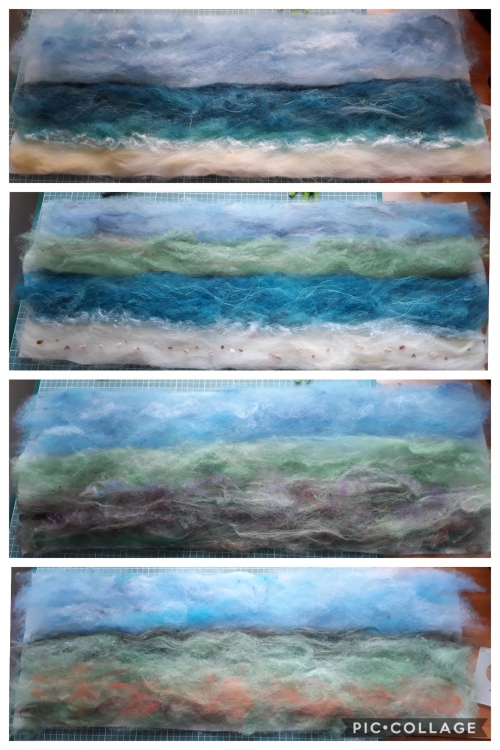 I finally got around to doing some photos of my Turtle Dove, these can be seen on the detailed post published earlier this week.  We finally had a dry day so I went outside in it and thought ‘this needs longer sleeves’, so since taking these photos I ripped back the ribbing, added more rows and then have 4” of ribbing rather than 2.5” in the pattern.  I’m much happier now the sleeves are full length.  I look like I have a Winnie the Pooh tum in it…to be truthful that’s because I have one at the moment oops!!!
I’ve also been working on my 2 x 2 hat.  I really like how the colours are showing on the simple design of this hat, and having made two for Allistar using that pattern, I know it is a comfortable hat to wear.  Hopefully that will be finished for next week’s YOP post.
When I was updating my Year of Projects Page (master list), I noticed there are a few items I’d made that haven’t appeared in any blog posts, so I thought I’d rectify that.
During week 17 I knit Perky Little Hat in Mothy and the Squid’s Hot Chocolate coloured bulky yarn.  I’ve used this pattern before, it’s a quick knit, a comfortable hat and the only downside is you do get cold ears on a windy day because of the holes in the rim pattern. I like it though and wear it quite a bit and if it’s very cold I wear it over the fair isle hat I knit, that on its own also isn’t very warm.  I took this photo in October on my husband’s phone and set it as his wallpaper hehe!

To match I made some Rasta Ready fingerless mittens in the same week.  The bind off is sooo tight, it looks like I only have 2 fingers!  I kept meaning to fix it but they are well worn now so too late.  This soft chunky yarn isn’t really suitable for mittens as they look pretty tatty now, but I do still wear them sometimes. 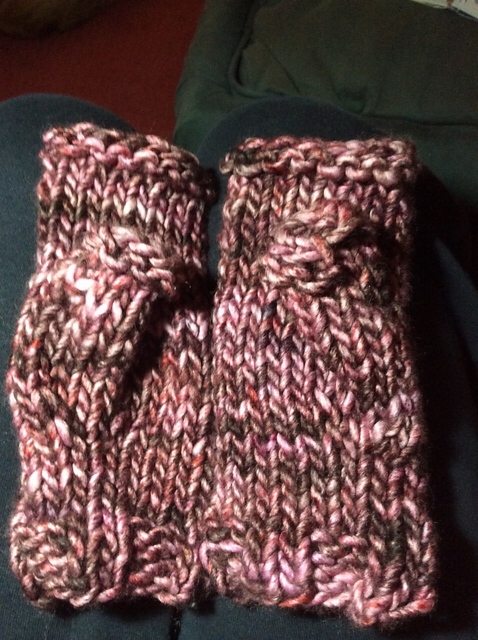 During week 29 I finished Allistar’s 2nd 2 x 2 Hat.  The first was in handspun, but this one used West Yorkshire Spinners Aran Croft yarn in Eswick colour (blue and green flecks).  I made the hat longer this time, so that it would cover his ears fully.  He has worn it a lot since, so it is obviously a hit.
There used to be a TV show called Ever Decreasing Circles that we watched years ago, it had two characters called Howard and Hilda that were a married couple wearing matching outfits.  When we are both out wearing our hats in this yarn it reminds me of that funny show.

I still haven’t thought of anything to sew yet.  I have some batik material that I’ve been thinking about trying a project bag similar to the one made and gifted to me by Alissa at Headknits blog.  It would be ideal for holding the end of my fibre in when I’m spinning!  I’m not sure I have the skills yet.  I did try to make a lining for my knitted bag, but the lining is too small, but I’ll maybe have another go.  As the knitted bag stretches a bit, it is confusing how I should measure for the lining.  Any tips?

Before I make up any more rolags with the John Arbon fibre I started to spin, I think I will knit a gauge swatch, to see how it looks and check I like the finished look.  I have 660g of this fibre, so I want to make sure I’m going to be happy with it.  I’ve also started to think about looking for a more portable spinning wheel to take to the Guild and other spinning group, second hand but it’ll still be expensive but I am definitely done with carting my Ashford Traditional around.  On Tuesday evening at the Ben Wyvis Spinning Group I’m going to take my Russian Supported Spindle to practice with.

I’ve booked on a Krokbragd weaving (pronounced Croak-brod) course at the Guild next month, so hopefully that will bring back my weaving mojo.  I like the idea of making some table mats once I’ve learned this method.

I met with my friend Caroline on Friday morning and then later my mother in law dog sat so Allistar and I could go out for a Valentine’s dinner.  We both ate way too much as we went for the special 3 course menu!  So losing weight hasn’t happened yet lol!
Last weekend there was storm Ciara and this weekend there’s one called Dennis!   The ground is now so wet we have little ponds appearing in our lawn and on the grassed area opposite our house.  Overall we’ve been lucky where we are though as many homes and business in England have been flooded and coastline eroded and sink holes appearing.
The farm we walk through most days have a border collie puppy called Rab, that Ylva is very interested in, but Rab just charges around and around full of beans.  I’ll try to get a photo of them.  I don’t know what magic the farmer sprinkles on his dogs, but theirs are pretty much the only dogs Ylva will tolerate.
________________
This is a Year of Projects update.  If you would like to find out more about the Year of Projects Group on Ravelry, or you’d like to join in, please follow the link for details.  To read what the other members of the YOP Group have been getting up to please click on the latest weekly folder and follow the links to their blog posts.  This is a friendly group with a wide mix of skills and crafting interests.
Edited with BlogPad Pro