I made one scarf this week using some blue, grey and orange merino wool.  I am trying to expand the range of colours from those I personally prefer.

Whilst my blending board was out I made up 3 batts, using orange 70% merino and 30% silk and added some coloured merino to 2 of the batts.  I considered spinning them, but I can’t see what I’d make that I’d wear, as orange isn’t my colour really.  I haven’t felted them either, so I’m still to decide. 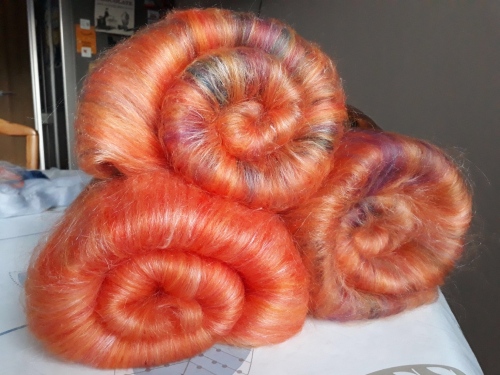 On Saturday we had a Challenge Bag day at the Felting Group.  Those wanting to participate were given a brown paper bag last month and sent a list of fibres and extras to fill it with.  Then on Saturday we swapped bags and made something with what we’d received.
So here’s what I made…a bag/pouch.  It was still wet when I took the photos.  As yellow and brown aren’t really my colours, I used those for the inside.  I will iron it a little once it’s dry.  Overall I’m really happy though.  The lady who got my bag of goodies made 3 items, a brilliant needle-felted woman, a sewing needle case and a small pouch for scissors etc.  Some ladies made stunning pictures and another made a bowl and flower.  We’ve decided to do it again at our December meeting with Christmas in mind.  It definitely challenges you.  (You can see the tip of my thumb in top right pic for scale.)

I finished my latest Two by Two hat using the yarn gifted to me by Alissa at Headknits blog.  It is really warm and a sturdy yarn so will cope well with my hood going over it and off it, with our ever changing weather.  About 10 seconds after I took this it started snowing again.  The brim is extra wide so that it is double thickness over my whole ear, super warm 😀

With some of the left overs I knit a business card holder.  Which I’ve filled with my own cards I had done by Vistaprint.

There’s some yarn left, so I’ve been thinking about making another small project.
The rest of this week’s knitting has been my Cabriolet Scarf.  I posted earlier this week about my safety lines having left some kinks in the stripes of the brioche, so I’ve been braving it and not putting any safety lines in!  I will when it gets to the cable section for sure.  It’s both addictive but mentally taxing to concentrate on each stitch.

I bought some weaving yarn for the Krokbragd weaving course in a couple of weeks.  As mentioned in a post early this week I’ve added a caveat to the yarn ban rule.  😂

I don’t know where this week has gone.  Other than cleaning the inside of some windows and doing some laundry I don’t think I’ve done much (other than crafting) this week.  It has flown by.  I have been making plans with friends for my trip down to the Wirral in April, but that’s about it.  Hopefully next week I will be more productive around the house.
My husband and dog are both away this weekend, so last night I went out for dinner with a friend and my plan today is to head down to Highland Wildlife Park where they have snow! They have 4 polar bears, two adult males and a female and her son.  Their two enclosures are ginormous and the two boys love sliding down the big hills on their bellies in the snow and playing on their frozen lake they have.  There’s also snow leopards with cubs and snow monkeys too.  It is an enormous place with huge enclosures and animals that are used to living in cold temperatures.
Here’s a video I took 9 years of one of the males, Walker, playing on the ice.
https://youtu.be/9w9DaflotZ0
________________
This is a Year of Projects update.  If you would like to find out more about the Year of Projects Group on Ravelry, or you’d like to join in, please follow the link for details.  To read what the other members of the YOP Group have been getting up to please click on the latest weekly folder and follow the links to their blog posts.  This is a friendly group with a wide mix of skills and crafting interests.