Having signed up to join in on the Year of Projects 2018 on Ravelry, I had forgotten all the rules and was creating things but not doing the weekly Sunday blog posts and sharing the link on the Ravelry group page.  So on Thursday I remembered to share the link…but now realise some of those things were done this week and not the week before!  Also I’ve commented about other people’s blogs on the group page, which I don’t think I am supposed to do.  So basically a total muddle. Hopefully the group members will forgive my blunderings.  🤞

It is interesting to see all the different projects people are working on, and how I am not alone in having lots of different types of projects on the go at the same time.

If you are interested to see what the Year of Projects on Ravelry is about click here.

So this week I also made the project bag and notions pouch and spun some Samoyed dog hair (as shown on my previous post)!  Both should have been on my projects list as I was expecting the dog hair and had the material to make the project bag!!  Hopeless!

I also finished spinning the ethereal ether fibre from Gilliangladrag…I was going to post a poll on my HighlandHeffalump Facebook page, but see (below) what Facebook said about it!  The poll was going to ask if people thought I should over dye it with a brighter colour!!!  Seeing as Facebook thinks its a nude body I decided to definitely dye it with some deeper colours! 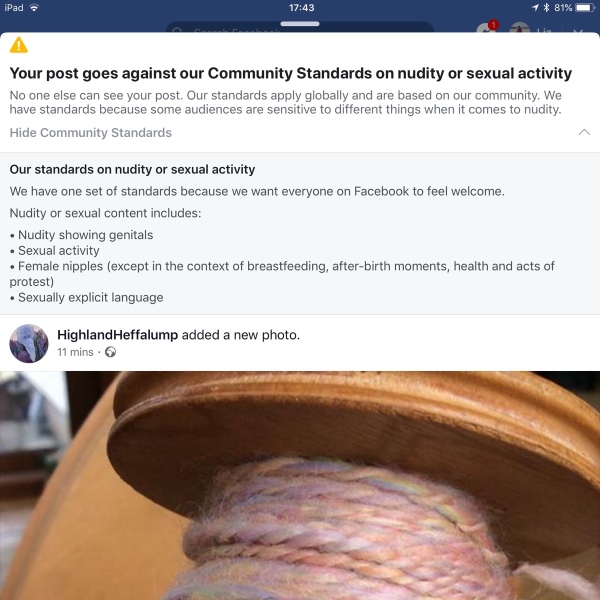 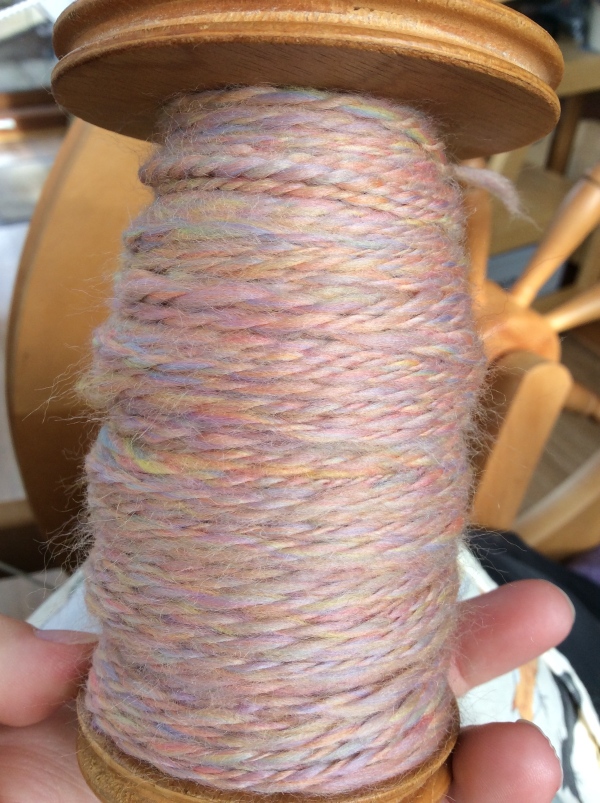 Suspect the position of my finger didn’t help matters! 🤣

I did dye a previous batch of this when it was spun, as I thought the colour definitions had been lost and I love the wee drink cosy I made from that batch, so tried to replicate that again.  Its a shame to dye what started off as such pretty colours, but this fibre is better suited to wet or needle felting I think…or a method of spinning that maintains the colours better.

I have kept aside a small amount unspun in case I ever make a unicorn, as the colours would be great for a pastel rainbow mane and tail…but what I have spun I used as more dyeing practice using hot pink, Ice and Opal mixed in different quantities, and carefully applied with a pipette to get lots of variation, only to discover it was all pooling together underneath the yarn, so has ended up with less tonal changes than planned…it is also spookily similar to our bedding colour!  I am such a purple addict!!!

Talking of purple, I had a go at felting a lightweight scarf using merino, silk and some locks…of course its purple!  The next one I make I will only have the locks on one side, as they are a bit scratchy on my neck. 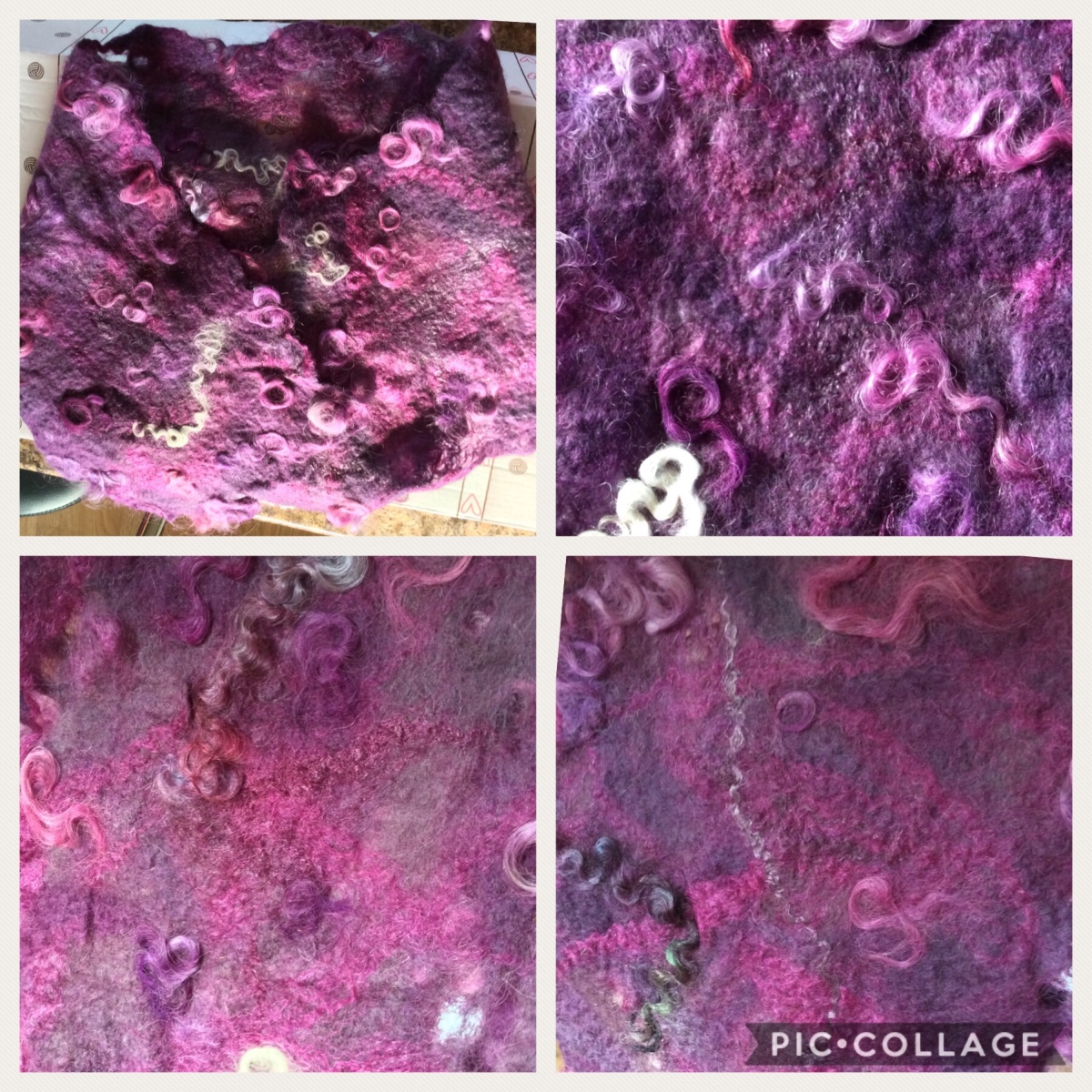 No new knitting or crocheting is allowed until my Chimney Fire cardigan is finished! It must be finished by the time it gets to winter.  Although saying that we are off to the Orkney Isles for a week camping in a tent and I won’t want to take that, so maybe I can let myself do another shawl with some homespun that week.

To help keep track of my YOP list I have created a separate page with the list, so I can tick things off when completed and add links to the separate posts.

A new project on the loom, but due to me misreading the pattern I need to wait for more yarn to arrive oops! Rookie error.
Finished socks in @cookstoncrafts Thistly Brae finished this week. Pattern is my own variation on the Hermione's Everyday Sock pattern (free on Ravelry) #sockknitting #cookstoncrafts #knittersofinstagram
Garden path shawl is off the loom! Pattern by @casanova_kelly_weaver with some slight differences on the width and number of tabby weaves between the bouquets. Yarn is from @mothy.and.the.squid .
It's been a while since I have posted on this Instagram profile. Thought I would share my latest weaving project. Garden Path scarf by @casanova_kelly_weaver (although I have slightly tweaked number of rows between the bouquet rows). The yarn I won last year and is from @mothy.and.the.squid
My first silk cap spun (cobweb thin) from @skyesilks and my first spinning from the fold with some Yak & Silk (lace thin) from @eweniquefibres. #spinningyarn #spinnersofinstagram #ilovepurple
Litmus cowl by @amyflorence in 2020 Advent Yarn from @cookstoncrafts #litmuscowl #cookstoncrafts #cookstoncraftsadvent #adventyarn #knittersofinstagram #knitting