I think this is the first year ever (well since I was old enough to write) that I haven’t written a list of new year’s resolutions!  On the 3rd I packed away all our Christmas decorations, a bit early but the tree was drooping and dropping needles and I was ready for a tidy house.

It is interesting to be just over half way through the ‘Year of Projects’ and at the same time thinking about 2019 ambitions and plans.    I obviously want to finish my list by the end of June, but also have been thinking of some other ideas for this year.  As I haven’t really felt well enough to be knitting or doing other crafts I have been doing some catching up on other crafters blogs and vlogs, looking at Ravelry pattern searches and getting some inspiration for the year ahead.

I have decided to join in the Grocery Girls 2019 Sock Bash KAL, which in January has the theme of ‘local to me’, so I am going to use some of the locally dyed yarn I bought at Loch Ness Knit Fest.  I still need to pick one of the skeins and a pattern but they’ll be short socks for my small feet.  Under their KAL rules if you knit shorties then you need to knit 2 pair to qualify, I don’t wear long socks so better I make short socks I will wear.  I can’t see me knitting 24 pairs of socks this year though, so suspect I will only lightly participate in the KAL.

In 2017 I knit a short sleeve chunky jumper that I wore on a walk on January 1st 2018 and haven’t worn since.  I re-blocked it but realise I just don’t like how it sits on me.  It’s too short, neck is too tight, it is still pretty stiff and scratchy wool and so at some point I am going to frog it.  I will probably make a hat, cowl and mittens set with the yarn. 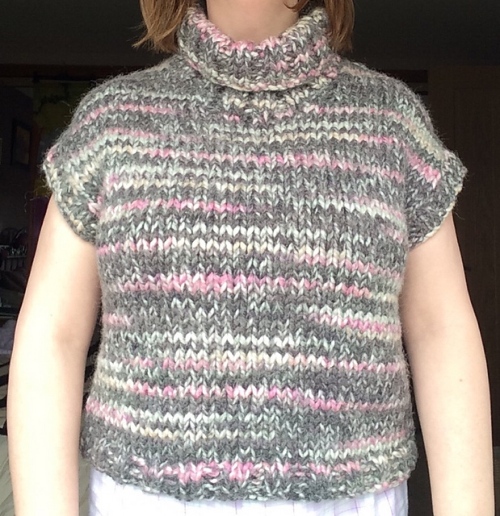 I have updated my YOP list to include the sock KAL, but still thinking and planning what else I may add to it, without endangering completion of everything already on it!

I had a go at making some rolags on my blending board on Boxing Day (before I was ill) and I seemed to wind them around the wooden poles so tightly it was very difficult to slide one of the poles out.  It looks so easy on the clips on YouTube.  I haven’t spun them yet.

On Saturday afternoon I found some clamps in the garage and had my first go with my hackle using some black suri alpaca, merino silk blend and mohair!  You may think me nuts using expensive fibres for first attempts, but when it is spun I will knit it into a keepsake as my first attempt.  It isn’t like I am short on fibre, I have 3 boxes like the one bottom left + tubs + cardboard boxes + bags!!  I have more fibre than yarn at the moment, but given I wet felt, needle felt and spin it, that makes sense. 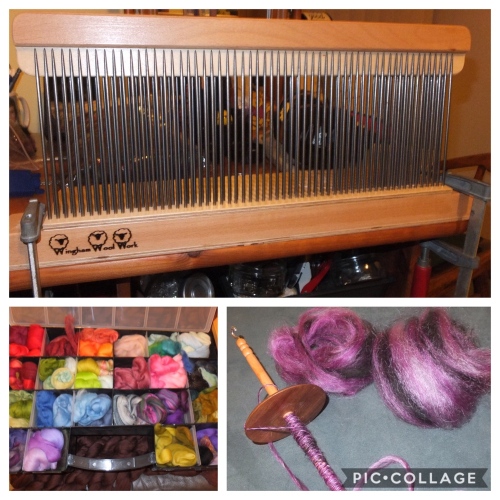 On Thursday, I made a start on the Northeasterly blanket by Melissa Alexander-Loomis aka Skeinanigans.  The short rows are quite appealing, but I don’t have many sock yarn scraps at the moment, so will treat this as a very long term on-going project.

I know I have said it before, but I am so glad I joined this YOP group, it keeps me motivated, the other makers inspire me and I love seeing their weekly posts.  If you would like to see what the other YOP members are up to check out our Ravelry group for the links to their posts.

Felting lots of Highland Seascape lampshades today for @alchemistgallery. They will be in the shop next week hopefully.
New lampshades finished this week
Hand felted Highland Seascape clock. #highlandseascape #wetfelted #wetfelting #feltingwool #handmade
A new project on the loom, but due to me misreading the pattern I need to wait for more yarn to arrive oops! Rookie error.
Finished socks in @cookstoncrafts Thistly Brae finished this week. Pattern is my own variation on the Hermione's Everyday Sock pattern (free on Ravelry) #sockknitting #cookstoncrafts #knittersofinstagram
Garden path shawl is off the loom! Pattern by @casanova_kelly_weaver with some slight differences on the width and number of tabby weaves between the bouquets. Yarn is from @mothy.and.the.squid .